If you visit Budapest, you will see a lot of Jewish attractions in Budapest, the Great Synagogue in Dohany Street to start with, and dozens more (see our Jewish Budapest map here). If you decide to discover the Jewish sights in the city, rather than taking a Budapest Jewish tour, we recommend starting your self guided tour in the city centre, in the old Jewish Quarter.

The stumbling stones are less known to many visitors.

One of the many fine details in Budapest are the stumbling stones, traces of Jewish citizens who lived, worked, played and existed in Budapest before being taken away by the Nazis to be transported to lagers, concentration camps, gas chambers.

These stones are like cobble stones built into the pavements on the steets of Budapest, and are made of copper and stone. 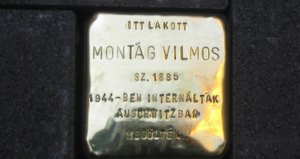 Before the Shoah, it used to be the custom in Germany for Non-Jews to say, when they stumbled over a protruding stone: “There must be a Jew buried here.” (source: Wikipedia)

So the stumbling stones do not actually stand out of the surface of the pavement, they are not meant to be stumbled upon literally just in a metaphoric sense: you see them, and you start to wonder, what is this shiny copper stone doing here? The letters on the Budapest stumbling stones are written in Hungarian, but the standard text is usually very concise: the name of the person who lived there and the from – to period of her existence.

Are the Stumbling Stones only in Budapest?

No, and the first ones were not even laid in Budapest. The first stumbling stones were made and planted on the streets of Germany (Hamburg, Aachen, Bremen, Dortmund, Duisburg, Frankfurt am Mein, Wurzburg, etc.). There are over 2,950 in Berlin, and 2,600 stolpersteine in Hamburg alone. In Cologne, there are approx. 1,400 stumbling stones. And the numbers are growing.

As of October 2007, Gunter Demnig had mounted more than 13,000 stolpersteine in more than 280 cities. He expanded his project beyond the borders of Germany to Austria, Italy, the Netherlands and Hungary.

In Hungary, it is not only Budapest where you can spot the copper topped stumbling stones, but in all over the country where Jews were deported: Szeged, Zalaegerszeg, Szombathely, Kiskunhalas, to mention but a few of the settlements.

When were the first Stumbling Stones Planted in Budapest?

The first three Stolpersteine were installed on April 27, 2007.

Where are Stumbling Stones in Budapest?

This is the map of the current stumbling stones in Budapest. If you don’t see a stone on the map, please let us know. Thank you.