Day 3 of the 3-Day Budapest Stay

Day 3 – things to do on Day 3 in ‘3 days Budapest’ – a weekend getaway in Budapest, Hungary

1, Let’s start the tour in Budapest city centre, Deak square (almost all public transport lines meet here). If you haven’t had breakfast yet, take a 5 minute walk to Cafe Gerloczy by Deak square for a relaxed cup of coffee / tea and fresh bakery products.

Or simply go to Astoria square, which can also be your starting point of the day (Astoria metro station is on M2 red metro line). A 2 minute walk from the station takes you to our first point of interest today: the Central Synagogue in Dohany street, Budapest. 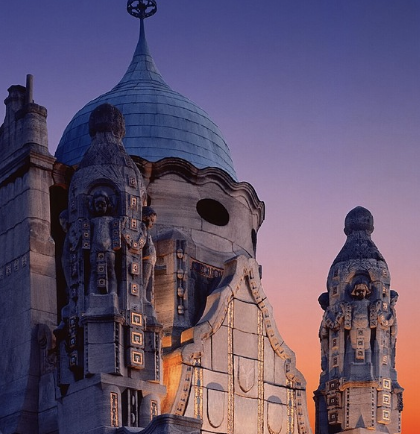 2, The Moorish style Central Synagogue in Dohany utca is well worth a visit. This is a huge synagogue indeed, the second largest in the world (room for 3,000 people). A unique place with a unique history – do not miss the synagogue guide and the Weeping Willow holocaust memorial. The ticket also includes entrance to the Jewish Museum with several artifacts, memorabilia, and more. You can learn more about the historical background of Hungarian Jews, many of whom have become world renowned scientists, artists.

If you are interested in the old Jewish Qaurter, you can just keep on wandering about the following streets (utca) and the streets within them: Kiraly utca – Csanyi utca – Klauzal square – Klauzal utca – Karoly korut – Dohany utca (where the Central synagogue is). Here are some of the recently opened ‘pubs in the ruins’ (19th century buildings waiting for restoration and turned into hip bars and pubs instead – temporarily (?)), like Szimpla kert in Kazinczy utca. Further highlights in the Jewish Quarter: Gozsdu court (every Sunday GOUBA, or Gozsdu Bazaar / Fair), and further synagogues: one in Rumbach street (for status quo ante Jewish) and the Orthodox Synagogue and Mikveh in Kazincy street.

3, Take Kazincy street from the Central Synagogue to get to the magnificent Opera House in Budapest. If you want to have an early lunch, you can try the elegant Fausto’s Ristorante (Fausto’s Etterem) in Kiraly street, or the humble but much favoured classic Hungarian Klauzal eatery on Klauzal square, or Koleves Vendeglo (Stonesoup Restobar) in Dob utca. The walk from the Synagogue to the Opera is about 0.8 mile or 1 km. 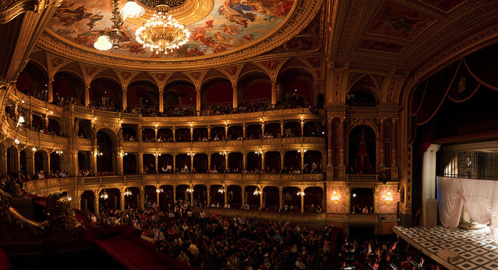 4, Hungarian Opera House – fine architecture, quality performances in Budapest. Even if you are not into operas, you will appreciate to take a walk inside the building. It is truly enchanting, evoking the vibrant cultural life of the 1900’s fin-de-siecle Budapest. It is definitely lunch time by now, and you are close to a Budapest ‘restaurant quarter’ (Liszt Ferenc ter cluster of restaurants in a 5 minute walk): Cafe Muvesz, Cafe Bouchon, Balettcipo Restaurant, Ket Szerecsen Coffee House and Bistro, Klassz Bistro (Klassz Bisztro), Menza Restaurant Budapest etc. are all nice and are all nearby, if you want to sit for a while and have a good lunch. 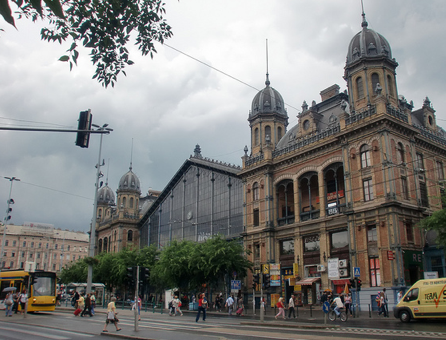 5, Walk to Oktogon ter, the square with 8 corners, at the crossing of the picturesque Andrassy Avenue (part of the UNESCO World Heritage) and the Terez street section of the Grand Boulevard. Turn left on the Grand Boulevard (Nagykorut), and either take the tram (number 4 or 6) for 1 stop, or walk 10 minutes to Nyugati Train Station. The building of the Nyugati train station is a piece of art designed by the Eiffel group – you will surely recognize the stylistic steel structure similarities between the Eiffel Tower and the Nyugati Train Station in Budapest. Signature design. Right next to the station, you can find the West End City shopping mall – even if you do not wish to buy souvenirs, or some other goods, you can take a walk to the rooftop of the mall to find a calm, cool, green spot and to take a look around.

6, a, From Nyugati Railway Station: Option C – from Nyugati train station you can go to the St Stephen’s Basilica by taking one stop with the blue metro line (get off at Arany Janos street). The huge Basilica (8,500 seats) has rich baroque paintings, frescos, and a ‘look tower’, which is good for taking photos of Budapest, especially of the flat Pest side (but, to be honest, Fisherman’s Bastion and the Citadel on the Buda side are better for panoramic views and photos).

6, b, From Nyugati Railway Station: Option A – from Nyugati train station you can go to the Central Market Hall (fresh fruits, vegetables, meats, snacks in a superb building) by taking the M3 (blue) metro line up to Kalvin square. On Kalvin ter take a 5 minute walk (or hop on tram 47 or 49 for a stop) and get off right at the Liberty Bridge (still on the Pest side of Budapest). The Central Market Hall is one of the top tourist attractions: nice building, great displays, gift shopping, having a snack or an affordable late lunch, etc. You can take a walk on the river bank or cross the bridge to the Buda side to see and enjoy the Art Nouveau beauty of Gellert Spa Baths.

6, c, From Nyugati Railway Station: Option B – from Nyugati train station you can go to the Museum of Applied Arts (Iparmuveszeti Muzeum). Unique architecture with a striking colourful rooftop: the signature feature of Hungarian Art Nouveau, tiles made with a special majolica technique (Zsolnay porcelain) makes the building stand out from the rest. The neighborhood is not much to look at, but the museum is very nice.

7, Get back on the blue line metro, and take the subway to Ferenciek tere square, which is close to the white steel suspension bridge, the Elisabeth bridge. You can have several options (walk to the Danube, shop in Vaci utca shopping street, cross Elisabeth Bridge to the Buda side, etc.). We suggest a less frequented route.

Standing on Ferenciek tere square, face the white bridge, and take the street on your left side (Karolyi Mihaly street). Stop for a coffee, tea, or snack at Cafe Central. This place was a major literary and intellectual spot on the geo-historical map of Hungary: journalists, artists, tradesmen, left-wing and right-wing as well as centralist politicians met here to discuss their views. It was a cultural hub and an inspirational place for think tanks in Hungary. The cultural vibe died during the Big Brother socialism. After the socialist era, Cafe Central re-opened and has become one of Budapest’s elegant, airy cafes. The cafe has lost its thinking hub status. Still, it is a nice place to eat and and sit back and enjoy your holiday (if you are an arduous traveller you may  ponder about how Hungary can thank its independence to such formative cafes).

8, From Cafe Central, take a short walk to Karolyi Garden, which is a friendly little park with nice buildings around it, and a wifi cafe (before going to the park, you may wish to have a look at one of the Serbian churches in Hungary in Szerb street – approx. 5 min to get there).

9, If you are still full of energy and have time to kill, you can take the tram number 2 for a panoramic ride along the river Danube, which divides Budapest in Buda and Pest. Get off at the Petofi Bridge and walk down to Boraros square. Take a 5 minute walk along the riverbank of the Danube to the Palace of Arts in Budapest (‘MUPA’):  it is an art complex including the Ludwig Museum Budapest where contemporary art exhibitions are on (open until 8pm from Tue to Sun), and many concert halls where classical music, jazz, world music concerts are abundant. You can also see the big ship shaped building of the National Theatre and the many statues of former actors, actresses and directors in its big garden. 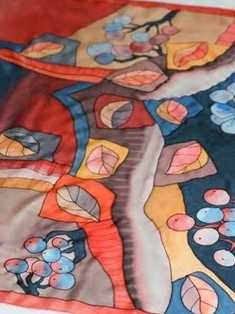 And one more thing, if you like specialty museums and strong spirits (alcohol-wise), once on Boraros square, you are also close to the liquor Museum of Unicum: take a tour in the factory, learn about how Unicum is made in Hungary and try the various herbal bitters, which will not only lift your mood but will be beneficial for your health (due to the loads of herbs mixed in the secret concoction of Unicum, the Hungarian emblematic bitter digestif drink and a digestive remedy. If you know Jagermeister, you will get the idea what sort of pleasure you can expect – although Unicum and Jagermeister are strikingly different.).

Day 1 of your 3-day Budapest programme

Day 2 of your 3-day Budapest programme