From Nyugati to Deli Train Station

You can get to Deli train station easily from Nyugati Train Station, either by taking the metros, or on the surface with trams. In either case, you will need tickets which are sold at Nyugati subway in ticket kiosks. 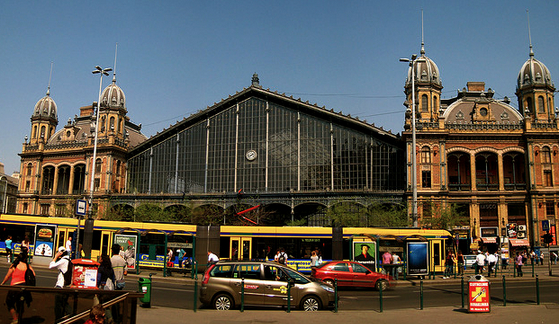 From Nyugati train and metro station, you can

1, take the M3 (also called blue) metro line to Deak square where all the metro lines meet. Your route will include the following metro stops: Nyugati – Arany Janos – Deak)

The journey on the metro from Nyugati Train Station to Deli Train Station takes about 15-25 minutes. You need to buy Budapest metro tickets in a kiosk or at a ticket vending machine at the station. You need to buy only 1 metro ticket as it will be good for the combined metro trip – you are allowed to use it for 1 hour (it more or less means that you can change at Deak, but you cannot go up from the tube to the surface to look around and take your time on Deak ter).

You need to validate your tickets first, and validate them before stepping on the escalators at the metro station. Even though sometimes you can get through down below to the station without validation, there are regular ticket inspectors cruising the metros, and the stations and you will be automatically fined if your tickets are not validated. It is no excuse to be a foreigner and no apologies will be accepted by the inspectors. Ticket inspectors might be rude and most of them do not speak English at all. Pleasse heed our advice and validate your metro ticket before entering the metro area, which means the escalators and not the metro cars / vehicles.

1, first take tram number 4 or 6 to Moszkva square (about 10-15 min), which will also give you a nice city tour of Budapest then

The tram trips should take about 20-30 min (you may need to wait for tram 18 about 5-10 min), so it is a bit longer than the metro trips but you see more of Budapest as the tram 4 and 6 crosses the Margaret Bridge at the Margaret Island.

Buying a ticket for the trams is just as important as buying tickets for the metro. You need to buy tram tickets (basically the same tickets as metro tickets) in a kiosk or at a ticket machine at the Nyugati railway station (there are several vendors, most of them in the subway section, under the railway station). Unlike in the metro-metro trip in the first option, taking 2 trams means that you will need a so called transfer ticket (combining 2 trips), which is about 490 HUF (1.8 euros). The transfer ticket (atszallo jegy in Hungarian) is good for the combined trip for max 90 min, so you cannot take your time between the two trams to take a look around Szell Kalman (formerly Moszkva) square.