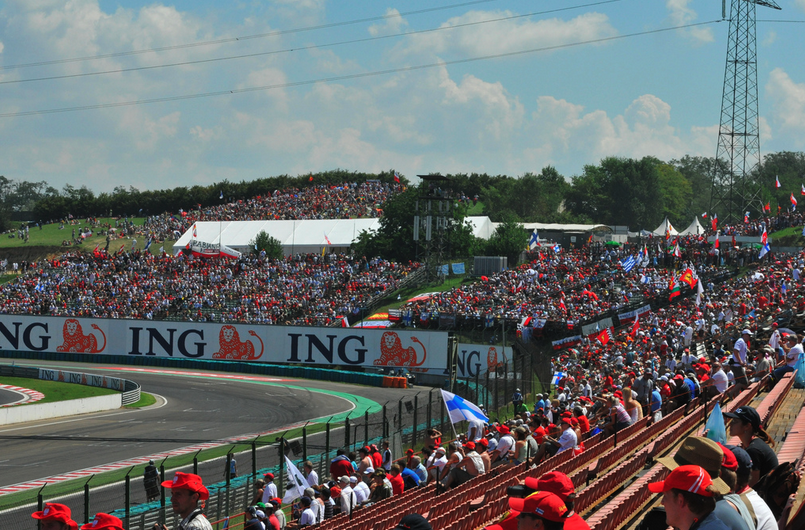 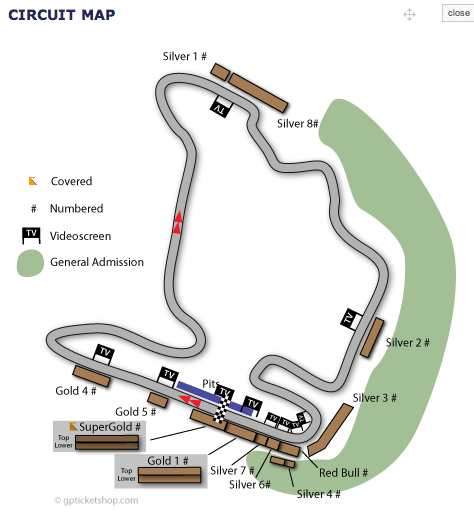 The circuit of the Hungarian Grand Prix is in a valley, with good overviews and lots of twists and bumps. Most of the races were on wet and dusty circuits, with the exception of the first wet race in 2006 (for 20 straight years there were only dry GPs)

The Formula 1 Hungarian Grand Prix is usually in summer, often on hot days in July. July is often hot so tickets in the roofed Gold sector are popular.

The atmosphere is great, the tracks are roaring, on the first day (or pre-day) you can walk around the pits, which is really a great feeling to get so close to the finetuned stallions. Since not all F1 tracks offer a pit lane walkabout, this may be your great time to get closer to the Formula race teams working on the cars.

Buying Tickets for the Hungarian GP

You can buy tickets online for the Formula 1 Hungarian Grand Prix on the official website on Hungaroring, general admission starts at approx. €85 (for a Sunday entry), up to €405 for the whole Grand Prix Weekend in the Gold sector.

Although there are some nice rooms and rudimentary camp sites by the F1 Hungaroring tracks, many foreign and local spectators book a hotel in Budapest, rather than on the spot by the Circuit.

The Formula 1 Circuit is near Mogyorod, a Hungarian village, which is approx. 18 km (11.18 miles) from the city of Budapest. Campsites and nearby hotels may get booked up 2 months in advance, so if you have not booked your rooms yet, hurry up for a great value of money.

So what are the best hotel and hostel choices for a good value accommodation in Budapest, if you are heading for the Formula 1 Hungarian Grand Prix, but want to stay somewhere downtown Budapest, yet close to the free shuttles from Arpad Bridge Budapest to Mogyorod Hungaroring:

How to Get to the Hungarian Grand Prix? 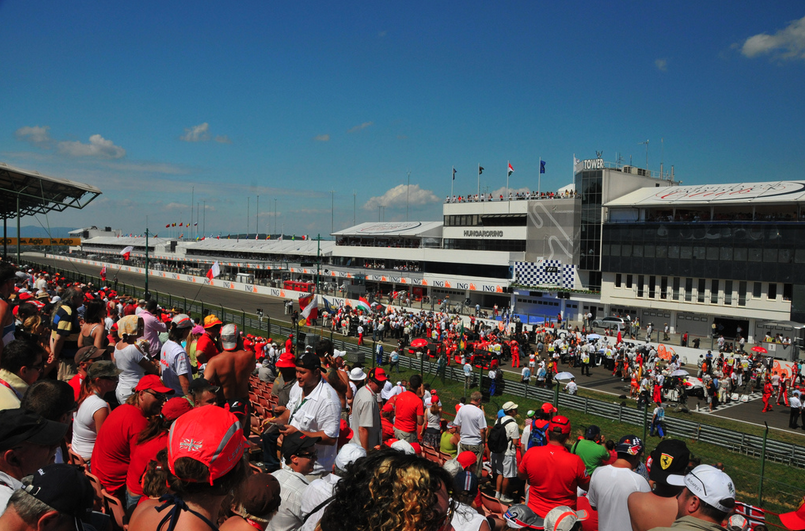 Please keep in mind, that traffic jamsfrom Budapest to Mogyorod are quite frequent because of the Hungarian Grand Prix  (and also because of the generally increased weekend traffic). There are free shuttle buses from Arpad Bridge bus station (near the Arpad Bridge M3 blue metro station) to the Formula 1 race circuit in Mogyorod, leaving from Arboc Street.

You can imagine that not only the buses are packed but Budapest taxis are kept quite busy too resulting in a really slowly flowing traffic (and if you are sitting in a cab it will be really expensive to get to the Hungaroring F1 tracks in Mogyorod village from the city of Budapest – so budget travellers should definitely avoid getting in a taxi, or try to join other fellow travellers to save some money.). Posh visitors can even use a helicopter tour from Budapest (again, not cheap, around 75,000 HUF or so)

Foods and Drinks at the Grand Prix in Hungary

If you are on a tight budget, bring your own foods and drinks to save some Hungarian forints for Budapest sightseeing (there are loads of attractions to see once you are in beautiful Budapest). You may feel hot during the Hungarian Grand Prix: July in Hungary can be quite hot, between 30 and 35 degrees Celsius easily. If you feel overheated, just walk over to the aqua park pools right next to the Hungarian Formula 1 race circuit in Mogyorod (a cool water theme park with lots of slides).

Many of the seats at the Hungarian Grand Prix have no shades. Sitting for hours under the beating sun can make even the most devoted fans dry. Have lots and lots of drinks and a good safari hat / sunshade to protect your head.

“I found grandstands on the main straight particularly good, but the general admission area around the track is also interesting. Note that you cannot walk around the whole track that – only about half way.” (F1 Hungarian Grand Prix review from 2012)

“The spectator area is compact, easy to navigate and everything you need during a day at the races is available. The ticket prices are steep if you want to see the whole weekend, but those of us travelling on a shoestring do have an option too. For Fridays’ practice sessions, you can get tickets even to the best grand stands for 30 euros or less. That’s a real bargain for experiencing 3 hours of F1 cars plus F2 and Porsche Cup qualifications totaling up to some 10 hours of top motorsport entertainment.” (F1 Hungarian Grand Prix review from 2011)

Some photos of the Hungarian GP in Hungaroring Mogyorod-Budapest: 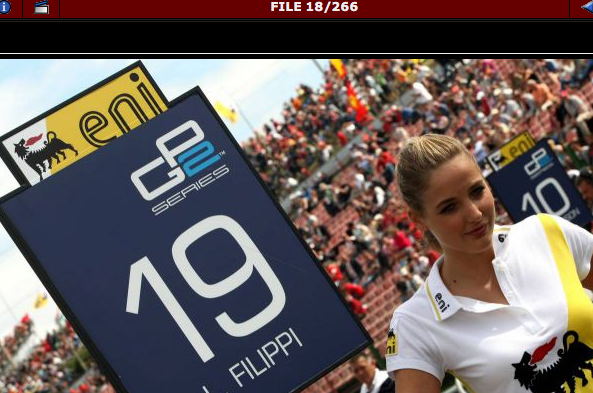 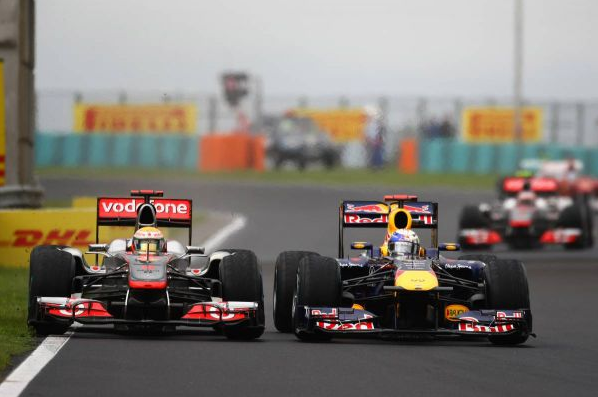 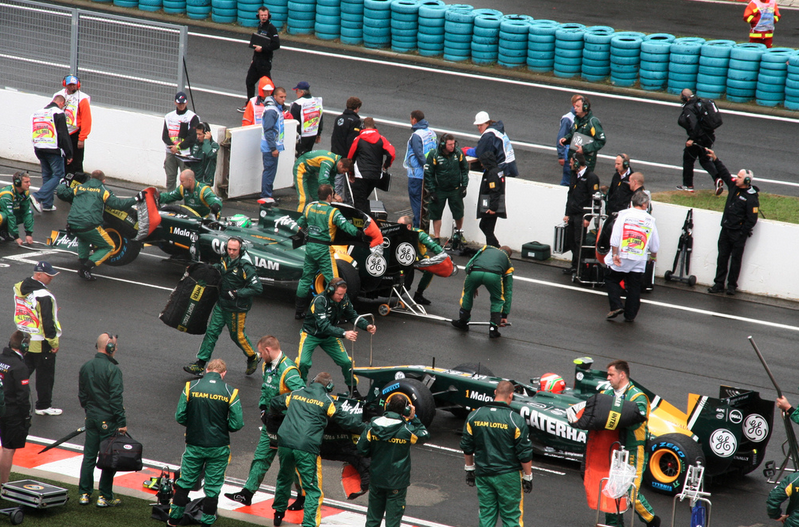 You are welcome to add your reviews in the comments below, we would like to know how much you liked Hungaroring, which is said to be very audience friendly by most visitors. But nothing is perfect, so leave your comments below.