Budapest New Year’s Eve is full of parties, special NYE menus in the hundreds of restaurants, street parties, various concerts (from rock to classical), and of course cruises on the Danube. Is it the best place in Europe to ring in the New Year? For some, yes, for others, maybe not. It depends on what you like and dislike. Exotic tropical heat? Avoid Budapest in December and come back in July, August. But let’s see the best things about Budapest New Year’s Eve, this love or hate day for many.

Here are some ideas for spending am amazing New Year’s Eve in Budapest, Hungary. 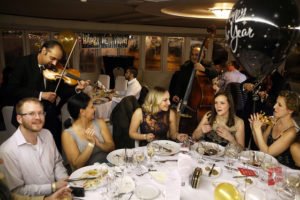 There is a wide range of NYE options in Budapest to choose the best setting for your ideal New Year’s Eve. Some want to do clubbing, others only want to have a nice dinner, a concert, or a festive river cruise in Budapest. There are dozens of excellent clubs (from techno to metal), literally hundreds of restaurants with dinners (and many with shows and live concerts), several nice concerts, and yes, even New Year Eve cruise in Budapest.

First of all, book your NYE flights and accommodation well in advance to save some money. The nearer the NYE days come, the more expensive the hotel / hostel rooms get.Do check out the rental apartments options as often they will get you a great deal, especially if your are a group of friends visiting Budapest late December for the New Year’s Eve. Once you have booked the basics, book your party / make your restaurant reservation in advance too (3 weeks before the event takes place, many parties and restaurants have been fully booked).

Secondly, Budapest winters are quite cold, so hats, gloves, thick coats, boots will help you to have a lovely NYE in Budapest, or to have a peace of mind that you have the basic necessities. While heating in public buildings, metro cars, etc. is warm or often too warm (around 21-25 degrees Celsius), the weather outside is cold, often getting below freezing, especially at night (Dec, Jan and Feb are the coldest months in Hungary).

Thirdly, make some after party plans to start the New Year well, relaxed, happy, as we all should. Despite all appearances, there are many things that are open on January 1 in Budapest, even though this is a public holiday (unlike Dec 31). Mostly importantly, the Budapest baths are open offering naturally warm and refreshing spring waters and very affordable massages.

Fourthly, NYE is the night when the phone lines and Budapest taxis are hyper busy. Do not be surprised if you cannot shout Happy New Year via your mobile phone. Everyone is using their cell phones to text, to send crazy photos, to connect. With 1.7 million residents plus thousands of tourists, the lines are just too busy to be able to handle the traffic.

Do expect to have some telecommunication difficulties when it comes to using your phone between 11 pm and 1 am, the peak hours of Budapest NYE. Try to make sure that you can reach your beloved ones before these phone rush hours, or arrange your taxi before, after that. It does not mean that you will not be able to call a taxi company at all, or get connected, but you may have to try it more times or wait 15-25 min to get hold of a phone line, which is not typical in Budapest at other times of the year.

If you are staying in Budapest on New Year’s Eve with friends, relatives, have a set time at a certain meeting point to avoid losing contact with each other. It is reassuring to have a plan. But if you should lose your original company, never mind. Just join some other party people temporarily, and feel the NYE impetus.

Eat and drink? You will have plenty to eat and plenty of cuisines to choose from. Budapest is a real cosmopolitan city with hundreds of restaurants and at least 50 great restaurants (from Hungarian through Italian to French or Greek). Many restaurants have special NYE menus featuring both international and traditional Hungarian dishes. Outside restaurants, what is traditional Hungarian New Year’s Eve food? Well, most Hungarians would have some party assortments, including the must have NYE frankfurters with mustard and rolls, as well as Lentil soup or Lentil fozelek for NYE (the many lentils act as imaginary coins, which can make you rich … Ar we rich? No, but lentil is still good, and the superstition, deeply rooted in Hungarian folk, is still thriving).

Restaurants in Budapest on NYE will typically offer some live entertainment, especially in the more touristy areas of the city, like District V, VI, VII on the Pest side and District I on the Buda side (Buda Castle).

Budapest New Year’s Eve parties are all over the city of Budapest, in all genres, for all ages and interests. NYE parties are both inside (cafes, bars, clubs, flats) and outside.

The end of year celebration already starts a few days before Dec 31, so a lot of programs, parties, concerts are scheduled for Dec 29 and Dec 30. The Pre-NYE Budapest Parties became very popular in the last few years, now you can choose from various styles and type of events for these dates too.

NYE Parties on Budapest Streets focus on 3 major hot spots in the city, downtown Budapest: Vorosmarty Square, Oktogon Sq (by Andrassy Ave) and Eiffel Square at the Nyugati Train Station.It is hard to predict when these places get really busy, but usually around 11 pm the

First of all, in the very heart of the city, on Vorosmarty Square (also the location of the famous Budapest Christmas market), there are hundreds than thousands of people on and around the square to celebrate New Year’s Eve with bottles of champagnes, wearing sparkly party hats or thick winter hats, and making lots of happy or I-want-to-be-tonight noise.

Vorosmarty Square being the most central can get pretty crowded, often with many tourists mixing with the locals. As in any crowd, you may need to stay alert enough to take care of your values and belongings, or not to lose your friends. As mentioned above, you may not be able to reach your own merry company, either because of the many people in the streets, or because of the busy phone lines. If you split up, have a meeting point at a given time.

Vorosmarty Square can be a good point to start an NYE walk in the city. Head towards Deak Square (also lots of people on both Deak Square), cross the neighbouring Elisabeth Square with Akvarium Club, then take a walk on Andrassy Avenue to Oktogon Square (and Octagonal shaped square at the crossing point of Andrassy korut with the big ring road with the trams 4 or 6). On Oktogon, you will see thousands of more people (especially young guys and girls in their 20s/30s), from here, you can turn left, and in 5 min you will get to Eiffel Square where the third big open air party is at Nyugati Railway Station.

On Oktogon Square there are some live concerts with Hungarian bands, lots of cheering, friendly people dancing, clinking, drinking, and dealing with the cold with a big smile. This is also a good place to be at when the clocks strike midnight.

Unfortunately, there is no official website or well published info about these parties (the organizers themselves simply do not reveal details about upcoming events, concerts, hours, etc., sorry), so we are relying on the customary party info, and the fact that NYE street parties in Budapest have been running on for many years now.

Budapest New Year Fireworks Show:  many assume that Budapest celebrate the New Year with a huge fireworks show like many other cities on December 31. However, Budapest has the huge fireworks in the summer time on August 20, rather than on Dec 31. That said, there are some private fireworks usually by the river Danube, but they are not as spectacular as the summer fireworks (see the one in the picture from the summer. Now on NYE if you see fireworks it will be smaller and privately organized not by the municipality of Budapest).

Basically, all clubs and bars throw a New Year’s Eve party on December 31, and many have pre parties as well as after parties too. See our list of top Budapest bars to get an idea where you could head to, where your will need to book a ticket in advance to be party of the best clubbing on NYE in Budapest. Some of the best Budapest New Year Parties  we have collected here.

Needless to say, many of the best hotels in Budapest are organizing a NYE party to say farewell to the old year in style. Luxury Budapest hotels, like Corinthia, Hilton, etc. as well as top tier hotels like Hotel Gellert. Please visit the hotels website to learn more about their New Year’s Eve packages, shows, dinners. Did not find what you wanted? We can look you up some options personalized for you for a small sum of donation to TopBudapest.org.

Those who love great panoramic views of Budapest, live entertainments (touristy shows with Gypsy music, dancers, etc.), buffet dinner and open bars can book their New Year Eve river cruise and party on some of the ships of Budapest. Budapest NYE cruises are quite affordable as a whole night party – with “eat and drink as much as you want” options, e.g. this Budapest New Year Cruise on Dec 31.

While the thermal baths of Budapest are open on Dec 31 and Jan 1, and the spa baths are often the venues of amazing, awesome and unique bath parties, on NYE there won’t be spa parties (sparties). But don’t be disappointed.

At midnight, as if by a magic stroke with a wand, the happy, cheering crowds turn into solemn mood in Budapest for 2 min. Instead of loud cheers, laughs, jumping around, and big hugging, Hungarians, yes, we locals, go singing our national anthem with as much dignity as the consumed NYE alcohol allows.

This is a very Hungarian thing to switch from the friendliest party creature into a sort of ‘matter of life and death’ faced, “I painfully love my mother country even if all things seem to be against her” solemn mood. Do not be surprised, once the anthem is over, this shocking insight into the Hungarian national psyche is over, and the party mood is reset as if nothing has happened.

After the anthem, the smiles, cheers, loud shouting and big hugs come back with full force. Want to hear what we sing at midnight on New Year’s Eve in Budapest? Now, this is the Hungarian anthem, a really solemn hymn (of course, the lyrics is about a plead to God to bless the Hungarians and get help in good or bad, followed by a reflection of hundreds of bad and bloody years. How could we not go solemn singing about such turmoils?). Here is a version with English subtitles: