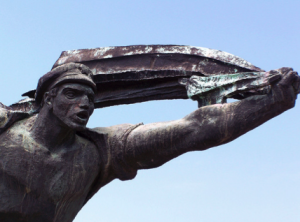 Budapest was hidden behind the Communist Iron Curtain until 1989. Communism left its scars and marks on the city’s attractions, people, and tours. No wonder that tourists love the Communist tours with their intriguing recent history, where the moments of horror mix with absurd humour, and funny Communist things like a Trabant car made of cardboard. Oh yes. It is not a joke. Note: we think the Communist tours in Budapest are best suited for 14+ children if you should happen to be on a family trip in Budapest.

You would expect that Budapest is still full of Communist sights, but the truth is, since 1989, the locals have been happily clearing away the memories of the recent past. So finding the Communist attractions in Budapest is not so easy. Many of them are spread out in the city of 2 million residents, on both the Buda and the Pest side. Can you still greet Lenin? Of course!

As for Hungarian goulash communism, you will find the House of Terror Museum fascinating and thought-provoking (the former HQ of the secret police, with a Soviet tank, portraits of the victims, etc.). If you are interested in buying second hand communist memorabilia (scarf, photos, etc.), you may visit the popular flea markets of Budapest. 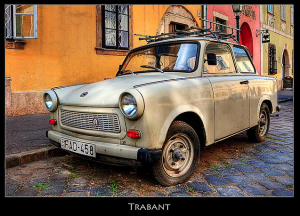 Another truly nice piece of communism that is well worth a visit, is the Children’s Railway up in the Buda Hills (about 30 min ride from Szell Kalman Square M2 metro station (former Moszkva Square)). The railway was run by serious pioneers in the past, these days it is run by not less serious children (the engine drivers are adults, don’t worry).

Marxim Pizza place named after who else but Marx is by the Millenaris Park. The pizza snack bar features several Communist posters, and snacks with typical Communist propaganda names (5 year plan, etc). It is worth a detour if you are in the neighbourhood (around Szell Kalman Square by the M2 metro station).

The Hospital in the Rock is one of the lesser known attractions in Budapest: the cave in the Buda Castle Hill has a huge nuclear shelter and well equipped WW2 hospital underground. A fascinating historical sight.

The Soviet Liberty Monument on Szabadsag Square is one of the few monuments  – in addition to the Liberty Statue atop Gellert Hill – which is still on display in the city. Freedom and irony pressed into stone.

Retro Attractions in Budapest from the Communist era include: