When it comes to the pros and cons of Budapest public transportation, we can say that there are a lot more cons, benefits. No wonder the official Budapest Card for tourists includes a Budapest travel pass for all vehicles of the public transport (except the Funicular) and other free entries (more: Budapest card benefits)

The pros and cons of public transport in Budapest

Even though grumpy locals cannot truly appreciate how good public transportation in Budapest is (oftentimes cursing the Budapest company as ‘dirty BKV’), if you compare it with the public transport of other big cities in the civilized west, it turns out that Budapest has no reason to complain: Budapest can compete with, and even outdo many western cities with its frequent and well built out routes, cheap tickets and logical system. But we Hungarians like to complain, sort of. 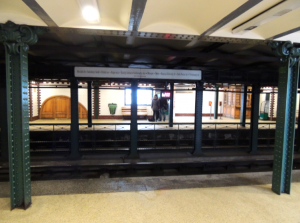 That being said, you can expect some downsides (and exotic post-communist features): crammed buses and trams in peak time, unfriendly ticket inspectors, old Russian metros with rust showing through, etc. Rarely even beggars turn up to ask for money, or cancelled buses, trams make you wait further 5-15 minutes.

Frequent: On the other hand, ‘frequent metros’ mean metros that come and go every 5 min almost all day, buses and trams in the city centre run in almost every street and every 5-10 minutes. Most of them are in good condition and relatively clean. In the last few years old buses have been changed with new air-conditioned and low step in buses, so even senior citizens can get on the vehicle with less leg stretching. 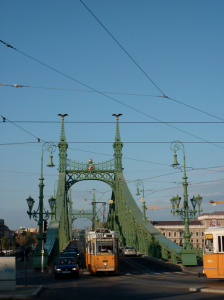 Cheap: Ticket prices are affordable or even cheap for tourists from western countries (free for children under 6, and EU citizens over 65 – show passports). If you ask a Hungarian about prices, you will hear that Budapest public transport is expensive, as based on the average annual income in Hungary it probably is. See for yourself: currently a single general ticket is 350 HUF (good for trams, metros, buses, etc.), or 1.5 Euro. So Budapest public transport is affordable. We think so. For a bunch of Budapest deals, you can buy the Budapest Card, the official tourist card of the city (free entries, discounts of 10-50% to Budapest attractions, Budapest restaurants, etc.)

Logical: Signs are clearly indicated and visible, so self-navigation is not impossible. The system is well built out, and as the streets of the Pest side of Budapest, where most Budapest attractions are have been planned in a modern mathematical way, the various routes are also easy to grasp and memorise. If you are at a loss, many Hungarians (especially aged 15-35) speak good English and will be happy to help you to get the right directions.

Long opening hours: Daytime schedule of Budapest public transport means that metros, buses, trams, trolley buses and suburban trains run 5-15 minutes from 6 am to 10 pm, so operational hours are pretty long. There are late night buses too, which run on the major city centre and party routes. Night buses have a capital ‘E” symbol after their number.

Route Planner: BKV has an online route planner. However, there might be some better options for planning your routes in Budapest

Dorky gifts: You wouldn’t believe, but there is even a BKV gift shop, which sells Budapest public transportation memorabilia and gadgets at certain metro stations, e.g. a cheap rain coat (poncho), funny looking mugs, a dorky computer mouse, a fine paper tram dummy, fridge magnets, what have you. (Wow, if I had discovered this odd Budapest souvenir shop earlier…)

More about BKV on BKV FAQ