From May 30, 2012 all airport traffic in Budapest is managed at T2 (i.e. at T2A and T2B terminals) while T1 is closed down (at least temporarily, until the financial problems of the Hungarian airline company are sorted out in one way or another – Malev collapsed in Feb 2012). That means that if you plan to take the train to the city from the airport in Budapest (to Nyugati Train Station), you will need to take a short bus trip first to the train station from T2, as the Budapest Airport train station was built next to T1. Sorry. 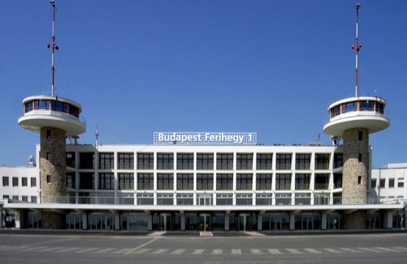 Budapest Airport is about 10 miles (16 km) from the city center of Budapest, so it is about a 35 minute drive from your downtown accommodation. Depending on the traffic, the trip to the airport may take 20-50 minutes. It is a safer bet to count on higher traffic in Budapest all week long in the daily hours, while between 9pm and 5am the city is more relaxed.

Flights in Budapest are very rarely diverted due to rough weather conditions (there are 4 seasons in Hungary, but the weather, winds, storms are not really in the extremes). If a Budapest flight should happen to be diverted, the two closest international airports are in Bratislava (Slovakia) and in Vienna (Austria).

Ferihegy 1: T1 (terminal 1) is shut from 30 May. When it is resumed again, it will usually serve cheap discount flights (RyanAir, EasyJet, WizzAir, Norwegian Air Shuttle, Germanwings, JET2, etc.). T1 and T 2A / 2B terminals are approx. 5 min distance form each other by car, so make sure you know where your plane will take off.

Here’s a warning from a fellow traveler:

“We would, however, sound one word of warning. As we climbed into our taxi on our departure, a senior member of staff, having asked us which airline we were flying with and to which airport, told the driver which terminal we required and he dropped us off accordingly half an hour or so later. It was only when we were inside the building that we were told we were at the wrong terminal. In England, this might necessitate a walk of a few hundred yards to put things right. In Budapest, it meant a journey of another three miles or so.”

Definitely DO NOT DO: Further Budapest warnings

If you take a taxi in Budapest, the trip from one airport terminal (Budapest Liszt Ferenc International Airport Terminal 1) may take about 5 min to the other airport terminal (Budapest  Liszt Ferenc International Airport 2A and 2B). But until T1 is closed down it is not an issue. So if T1 is resumed again, it is not enough to plan your trip to Budapest airport, you also need to check which terminal you will use: T1 or T2? The taxi driver will ask you anyway when you get in the car.

Check out Budapest FAQ for more useful tips!
Share your own Budapest experience whether it was a fantastic trip, a negative experience or a pleasant surprise. Send your Budapest photos, tips to TopBudapest [at] gmail [dot] com, or simply comment below.