Where to Buy Tickets in Budapest?

Where can I buy tickets in Budapest for the metro, bus, tram, etc.?

You can buy Budapest public transport tickets and passes at many many ticket kiosks in Budapest, but most easily at every metro station (usually in the subway public transportation ticket kiosks). Major stops on important bus and tram routes have ticket vending machines too. 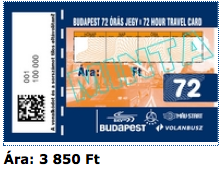 Can I buy public transport tickets at the Budapest Airport?

Yes, you can. There are newsagents at the aiport, which sell public transport tickets. They will also offer you a combined travel and cultural card called Budapest Card, which is supposed to entitle you to free trips in Budapest (for the time indicated, e.g. 72 hours, that is 3 days) and will give you the opportunity to get discounts at many museums, and places of interest in Budapest. Budapest Card in its current format is not really recommended by locals and fellow tourists as the days are too short to get into all the attractions and make the card really worth buying. The common consensus about Budapest Cars is that it is a waste of money, and you would be better off with a standard Travel Pass (for 24 hours, 72 hours, or even a week), plus buying the entrance fees at a couple of great attractions in Budapest. So if you are taking the bus and metro from the airport, just buy a single ticket, then at Kobanya Kispest metro station – where you change to the M3 metro from the 200E bus – buy a standard travel pass.

How can I pay for the tickets and passes in Budapest?