Is Budapest in Turkey? Or what is this madness about Turkish Budapest? Budapest in Hungary, a country in Central Europe, quite far from Turkey, which is in Asia. But the Turks were so fierce in the 16th century that a group of them called the Ottoman Turks fought their way well into the south-eastern borders of Europe with the sole aim of conquering the rest of the continent. And indeed they almost did. Luckily, there were many good soldiers who fought against the Turkish threat. 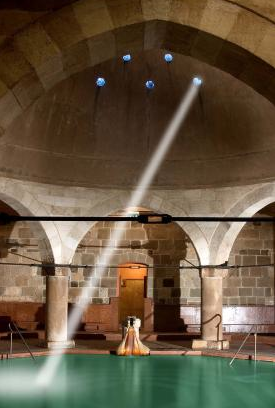 In the ups and downs of warring against the Turks, in 1686 the Turkish were cleverer than the defenders: in the battle of Buda (Buda is the hilly part of BudaPest today), they managed to stick their feet firmly deep in the Hungarian kingdom. While the Ottoman Turks were staying here, they re/built several buildings, some of which are Budapest top attractions today. The Turks had about 150 years to refurbish Buda and Pest towns in their own tastes – yep, they were staying in Hungary for so long. Matthias Church on the Castle Hill was a mosque during these years. Just as many other churches all over Hungary.

There are several Turkish attractions in Budapest from the 16th century Ottoman Turkish rule in Hungary, two Turkish baths, Rudas Baths and Kiraly Baths among others. Plus you can find the most western holy place of the world of Islam in Hungary: the crypt of (Bektashi Dervish) Gül Baba, known as ‘the Father of Roses’, who was a poet and a Muslim Saint, so this . The crypt, or tomb is called turbe in Turkish.

Rockhoppers tour company offers ‘Ottoman Turkish Empire’ tours in Budapest. The itinerary is always different; tours will be tailored to your personal needs. Reservation is needed.