There are several bike tours available in Budapest, here we suggest some of the best cycling tours in the city.

Bike Tours Budapest with Lunch: an in depth, budget 4.5 hour cycling tour in the city of Budapest with lunch included in the tour price. 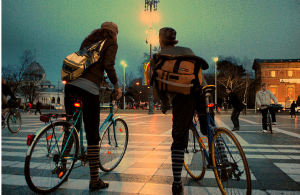 There are two breaks during the biking tour, also offering welcome drinks. The traditional Hungarian lunch is at the end of the tour after a well deserved cycling. During the bike tour you will visit top Budapest sights: the bike route goes from the city centre on Deak Square through the shady and picturesque Andrassy Ave (one of the Budapest UNESCO World Heritage sites) up to Heroes Square and the big green City Park and its attractions  (Boating Lake, Vajdahunyad Castle, Szechenyi Baths, the Budapest Zoo, etc.) then the cycling route goes back to downtown Budapest to check out he St Stephen’s Basilica. After crossing the Chain Bridge, passing by  the Danube Embankment, there is a short uphill cycling to the Buda Castle on the Castle Hill of Budapest

Budapest Bike Tour: an affordable 3.5 hour cycling tour in Budapest with a small group of bikers visiting many of the best Budapest attractions: the Budapest UNESCO World Heritage sites (Andrassy Avenue, the Danube Embankment and the Buda Castle), also the Heroes Square, the Budapest Opera House, the City Park, the St Stephen’s Basilica, the Hungarian Parliament building in Budapest.