From Budapest To Keszthely

How can I get to Keszthely from Budapest? There are more alternatives to go to Keszthely, a little town by Lake Balaton from Budapest. If you have not bought your plane tickets to Budapest, and your main destination is Keszthely, you may even want to look at flight options to FlyBalaton or Balaton instead of Budapest, as international charter flights (from Frankfurt, Dusseldorf, Hamburg, Berlin) go directly to ‘Balaton’ airport (the settlement is called ‘Sarmellek’), which is about 16 km, or a 20 minute ride from Keszthely. But let’s see what if you leave from Budapest to Keszthely. 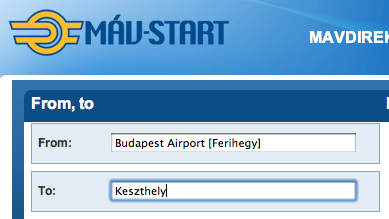 From Budapest Ferihegy airport to Keszthey by train

From Budapest Airport to Keszthely

Probably the most convenient way to travel to Keszthely is by rail, but if you prefer buses, you can easily get there by Hungarian Volan buses too from Budapest Nepliget bus station (bus rides take 2.5 – 3.5 hours, and buses run about every 2 hours).

While there are many trains to Keszthely, there is only one direct train from Budapest Airport train station at Terminal 1 to the town of Keszthely by Lake Balaton: the direct train leaves at 09:07 am and arrives at 13:14 pm, the duration of the journey is 4:07 hours, the distance covered is 208 km, 1st class train ticket prices are 4,540 HUF, 2nd class tickets cost 3,630 HUF.

But luckily there are several trains with only 1 change and approximately the same duration, so the trip won’t be a hassle. Trains to Keszthely leave from 2 major railway stations in Budapest, and it is entirely up to you which station you choose: locals base their choice on when the trains leave and which station is closer to them / their connections. Your train ticket will be good for both train stations, the only thing you need to bear in mind is that some trains require special seat tickets on top of the train tickets, while others don’t.

There are 2 big train stations, Deli railway station and Keleti railway station, where trains frequently leave for Keszthely, more about them at the bottom. First let’s start with the most convenient way to get from Budapest Liszt Ferenc International Airport (former Ferihegy) to Keszthely.

You can check the current trains between Budapest Ferihegy airport to Keszthely on MAV Start, the official website of the Hungarian Railway. When you start typing the name of FROM and TO, the website will offer you the name of the towns, choose the appropriate destination from the list. It looks like this now (see the pic), but you can simply type in Budapest Airport (or without ‘Budapest’ just airport).

You can choose from the following trains to Keszthey (check the number of changes in column 4 (Chg.) for the number of changes, as some of them would require 2-4 train changes during your trip and you surely do not want to ruin your trip to Keszthely with constant changes. As you can see in the screenshot, trains leave for Keszthely almost every hour, so you can connect your flight with your train trip conveniently provided you do not have lots of luggage with you (the screenshot is NOT the full list, there are trains between 4:24 and 23:44!). The more luggage you have, the worse it becomes to struggle through the busy city traffic to change from one train to another, so if you have more than a hand luggage, it is warmly recommended to take a taxi to Deli or Keleti ( where more direct trains go to Keszthely), rather than a train from Budapest Airport. Read more about Budapest taxi transfer here. 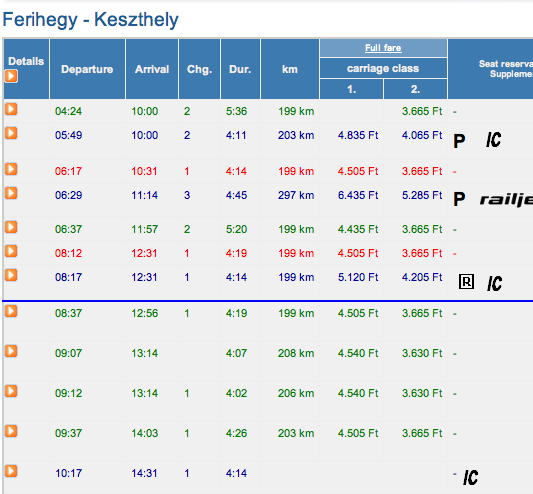 From Budapest Ferihegy airport to Keszthey by train

Although there are several trains where you only need to change once from Budapest Airport train station (close to T1 of the airport) to Keszthely, some of these changes require taking buses or trams in the busy city centre of Budapest. If you look at the table, you can see the tiny orange arrows on the left side. If you click on them, you will get more details about the train route (note the arrow pointing downwards for the detailed route): 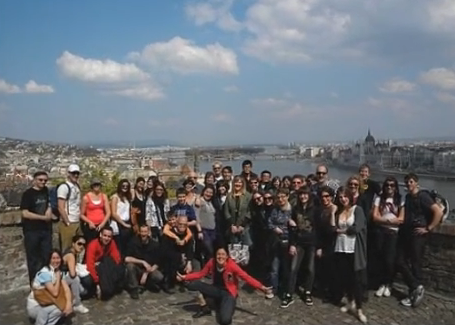 Now in the Train column on the right side, you can see that you need to take ‘local transport’ (highlighted with blue): you will easily get to Nyugati train station from Budapest Airport train station, but then you will have to figure out your trip between Budapest Nyugati and Budapest Deli palyaudvar, or Nyugati and Keleti train stations, so you basically have to transfer from train to public transport in the city to get from one train station to the other.

It is a breeze if you have a light handbag, but can be a bit annoying with anything heavier and bulkier in a foreign city, especially in peak times, when metro stations are full to the brim with people. If you are still interested in getting from Nyugati to Deli or Nyugati to Keleti by public transport, you will need to buy tickets for the public transport.

So when choosing your train route from the MAV train schedule check how many changes are needed. The system will enlist all the available train routes, even if it takes 3 or 4 changes, which is kind of ridiculous for such a distance.

Mind you, if you can see the acronym IC (intercity) in the last column, you will need to buy extra seat tickets, which are numbered seat tickets thus ensuring your booking the exact seat on the train. It is mandatory to buy the IC ‘seat ticket’ in Hungary (on top of the train ticket) even if you do not wish to have a numbered seat.

Unfortunately, the train station at Budapest Airport T1 looks worn down with lots of dork graffitis and unfunctional lifts, despite the fact that the new train station was built in July 2007 with great care. Sorry about that. Hopefully, by the time you get to Budapest Airport train station it has been restored, and is spick and span. (Budapest has some parts that are world class, true to the ‘Pearl of the Danube” and several parts that look like remnants or exhibits from the 80s, like the ‘Shabby Baby of the poor eastern block’. For some tourists it is exotic to see the mixture of glamour and neglect, but it makes most Hungarians feel angry about urban vandalism.)

From Nyugati to Deli

From Ferihegy to Deli

From Nyugati to Keleti